Resto & Custom
Citroen AX was quite a popular car at its time, but this is by no means a reason for me to make a custom one from scratch. There are three reasons I decided to do so. The first reason was the fact I thought it was an easy model to make from scratch, because of all its plain and straight shapes. To cut the story about this short, I was so wrong. 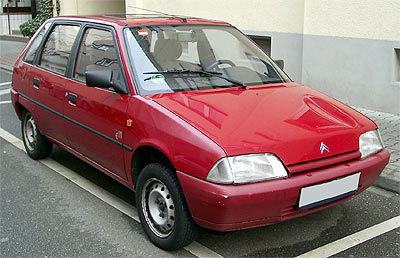 The second reason was the fact that a very dear person owned this car for several years and commuted a few hundreds of kilometers daily with it without any trouble. For those not familiar with this vehicle, it is a very small car, but also very reliable and you can still see many on european roads. Anyway, his car was red and very reliable, though the paint has sunfaded on some surfaces and it was by no means a fresh example. I remember how proud he was of that little car which coped with the huge distances he needed to travel at highway speed.
The third reason was an auction on a well known auction site. While I was randomly browsing the items, I found there was a Citroen AX in approx. 1:55 scale available on the market. It was made by Guiloy and i knew about its existence only from contacts with spanish collectors who are well informed in those obscure spanish brands. Finally, this rather crude model by Guiloy became an absolute no-go for me, thanks to its horrendous price at the auction ending. Ultimately, this gave me the boost to finally start that project. As I had no suiting donor available, I have decided to make one from scratch, only using an existing, but customized factory interior, wheels and a baseplate. The drawings of a papercut model have been scaled down in photoshop to my desired scale (around 1:60) and I started folding my beloved mustard tube sheet metal and glueing together the pieces. 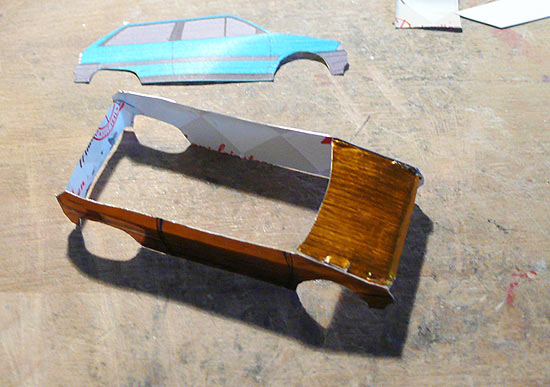 Soon after the glue has hardened, the metal "skeleton" has been surrounded by 2-component epoxy. After it dried, I sanded it to shape of AX's body. 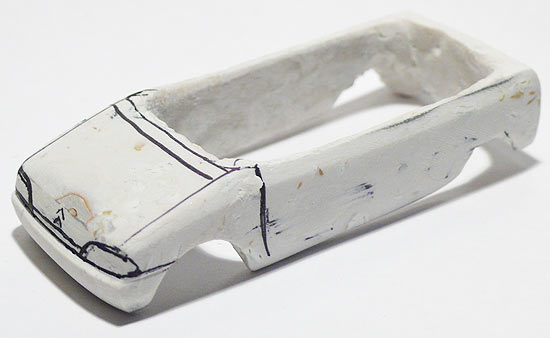 To make the roof, I approximately measured the sizes and distances that I needed and then I cut out a roof with its main 4 pllars (here its A and D pillars) which were the major support for the roof. 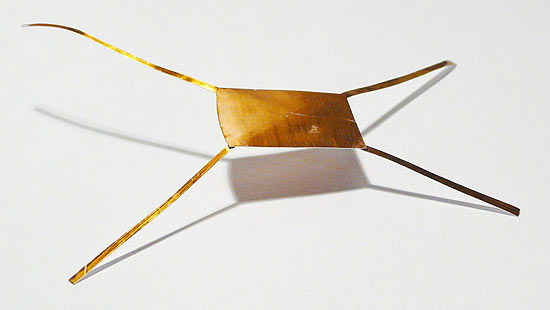 The putty covered the metal roof and it all dried for a day. 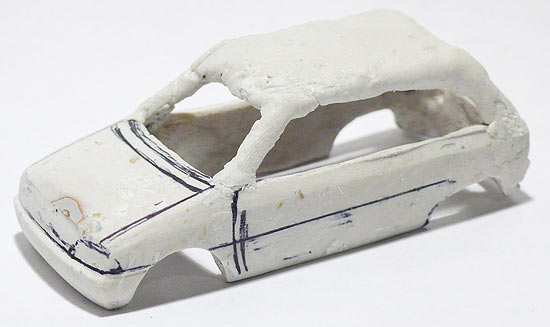 The next day the roof was finished and parts for the base and the interior were the target. These came from my box of donor cars. The temporary wheels have become a serious alternative to rubber ones i wanted for it originally. The final project however would get a set of whels from a Hongwell 1/72 beater. 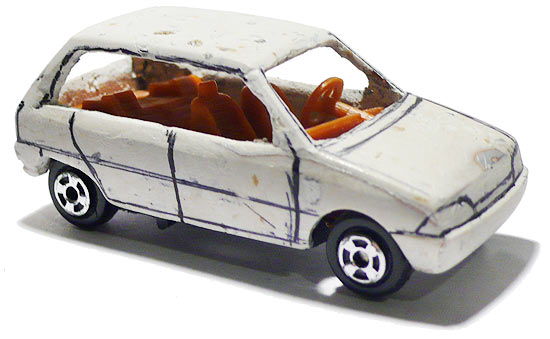 The original baseplate needed to be lenghtened by 1 mm. 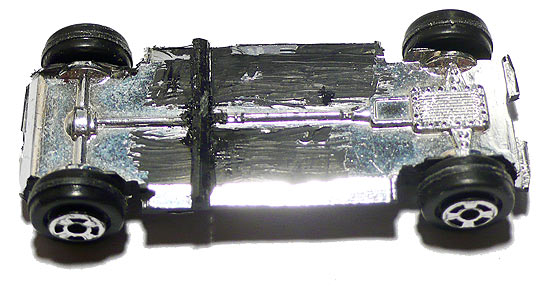 I decided to add some mirrors after having installed B and C pillars. By that point, major parts of the body have been engraved, so that the car got his hood, lights, doors and side trim. 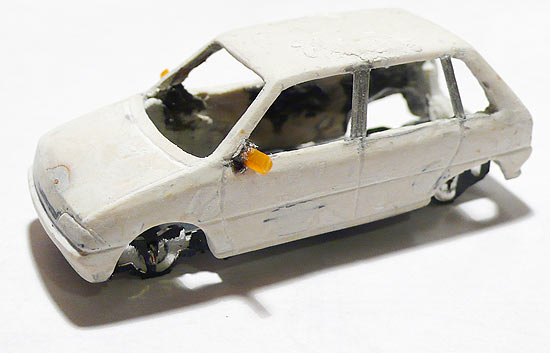 The rear door was made out of two components instead of only engraving it and putting in a window unit. 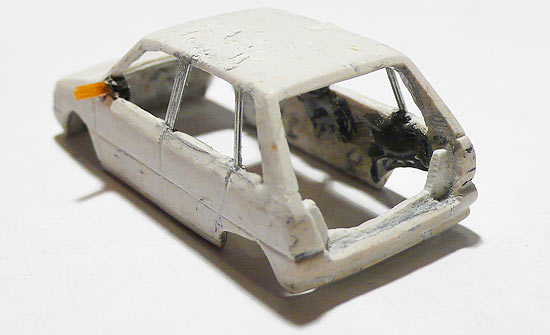 Here´s how the single rear door part looked like when it was shaped. 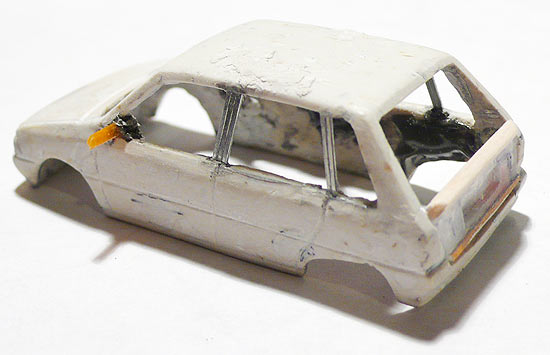 Then i have cut our the rear window and the windshield from a blisterpack... 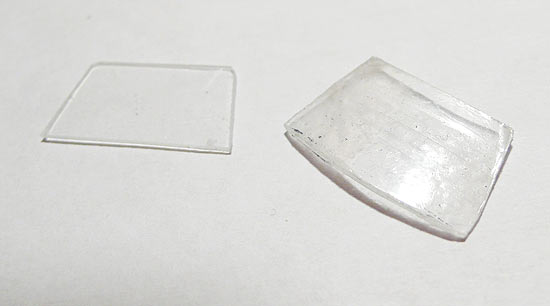 ...and in order to accept my custom made metal grille, the front got a hole. 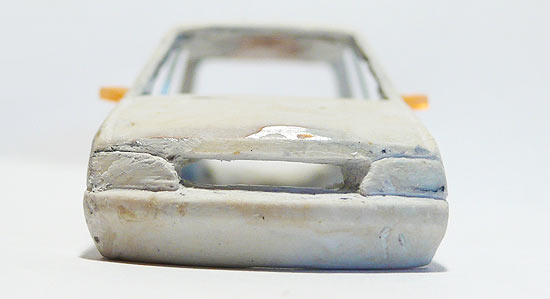 Here's how the grile looks like on the test-assembled model. 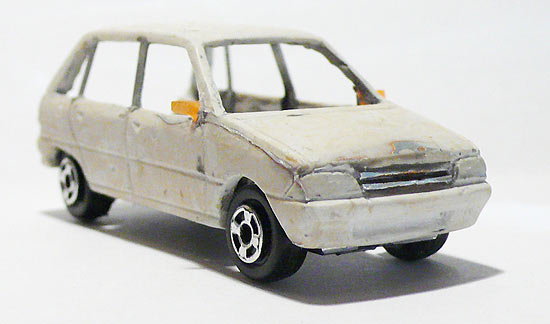 Finally I primered the car and sprayed two coats of red over it. Also, here you can see the windshield being installed. 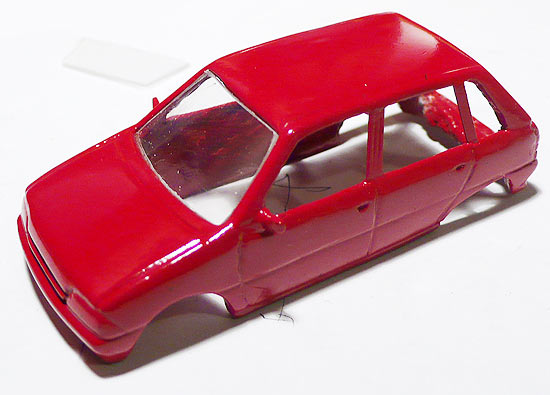 The baseplate got black. 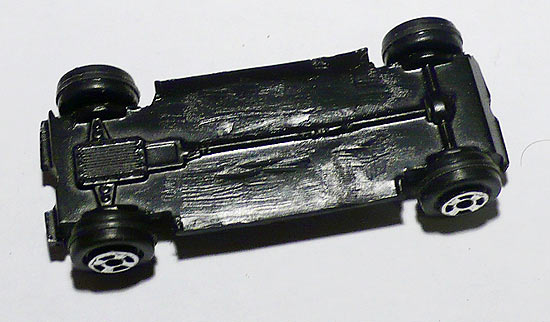 After i installed the rear doors, the model began to resemble the real AX even better. 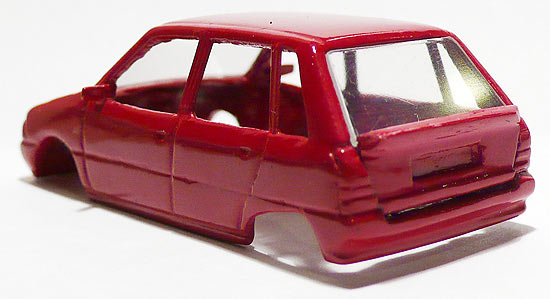 And after all the other details were added, I think resembles the real AX just fine. The side lines are stickers while the rest of the details is hand painted. I tried to paint the citroen logo, which in reality is sized about half a millimeter. With a steady hand and a thin brush, it was possible.

Here is the finished model. The wheels were a lucky find on a flea market, used from a Hongwell 1/72 Toyota Rav4. Aside from the obvious fact that they have too many screws (the real AX has only 3), they look quite nice on it. Hard to imagine these actually come from a 1/72 SUV. Also, I have decided to keep the headlights simple, without plastic inserts, to keep that half way between a toy and a model. For the same reason I refrained from adding a windshield wiper. so. 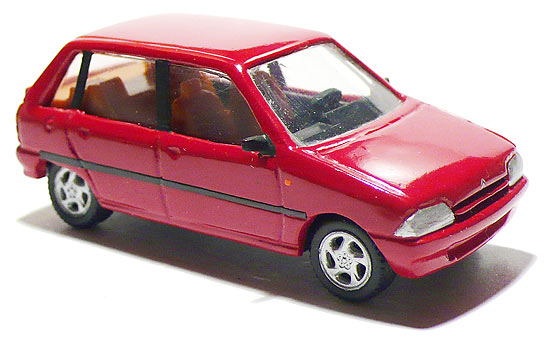 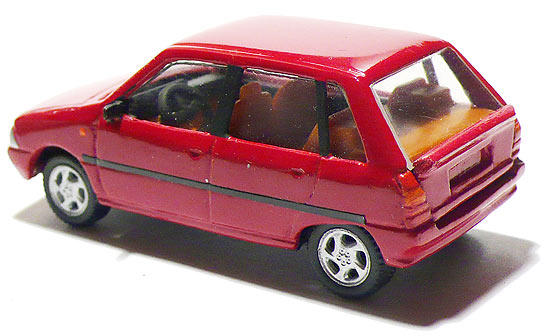 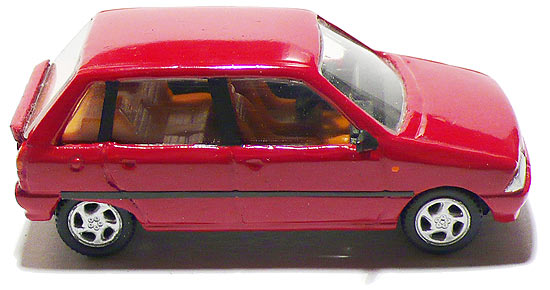 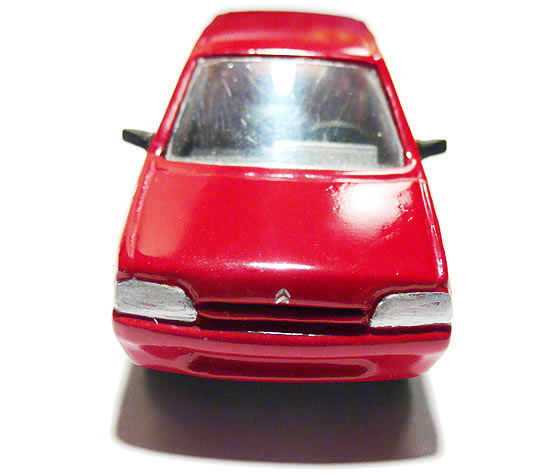 I hope you enjoyed this story just as much as I enjoyed making the model.
Pictures © by Sinicars