Most of us collectors love to have scale models of cars that they owned, drove or had to do with at some point in their lives.

I´m not different. I often looked for a model of a 1:1 car I like but remained successless.
Something had to be done to change this. 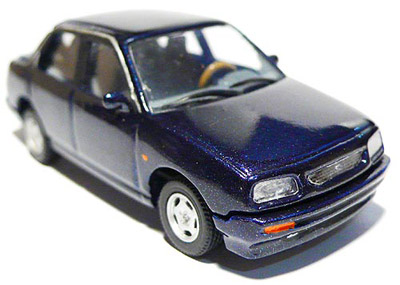 The next car I decided to do was a 1994 Daihatsu Applause, which was owned by my girlfriend´s father.

It is some sort of a "luxury" version with a lot of extras. Knowing how badly it has been treated, it´s a miracle that this car still ran so nicely. 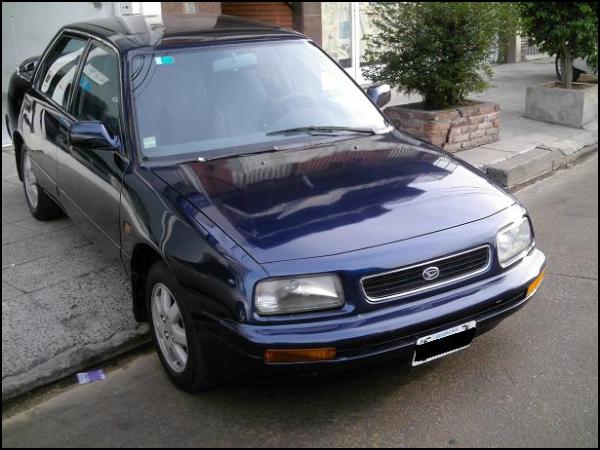 The car is long gone now, but until its demise with some 240.000 km it still worked fine. It was rusted at all places, due to never being repaired properly. When its owner began thinking about selling it and getting a newer car, I thougt it was about time someone honors the blue Applause's effort in all these years.

For a long time I thought what to take as a donor car, knowing that building from scratch is a hard thing to do. I decided to take one of those generic Summer models collectors always try to ID by looking at some hints that could possibly remind them of something real. In this case I have used a car some have identified as a VW Vento/Jetta. Usually, it came in big multipacks and might still be in production.

Here is what I've done:
Nitro helped me strip the paint from the body. The original wheels ahave been removed and instantly I started looking for suitable set of wheels.

The final wheel should under no circumstance have the rims bigger than 13" (in small scale of course), which were in use on the real car. 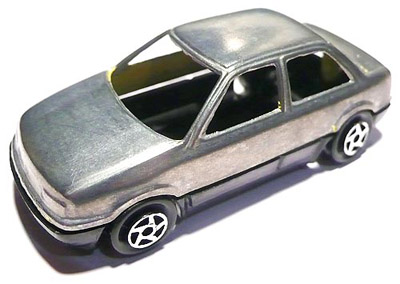 After that I cut the roof apart and widened it and also cut out the trunk part for my idea of creating an opening trunk lid, one of the most characteristic features on the Daihatsu Applause.

The car is a Sedan type of vehicle, but with 5 doors meaning that the trunk lid opens including the rear window, like on hatchbacks. 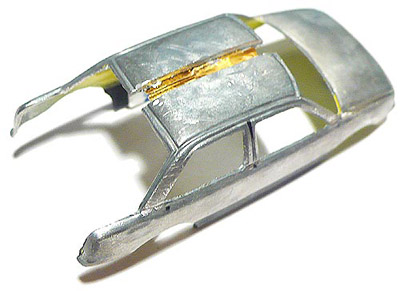 Here you can see the parts that i covered wth putty and modeled them to shape.

From a mustard tube metal and putty I created the trunk lid. Then I had to do some sanding and cutting to adapt it to the rest of the body: 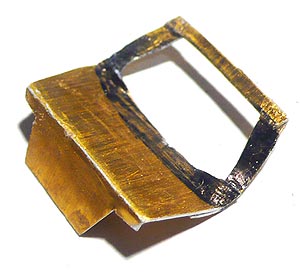 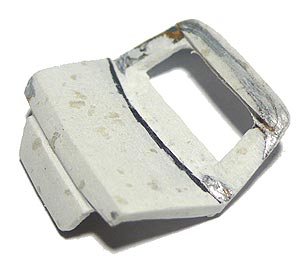 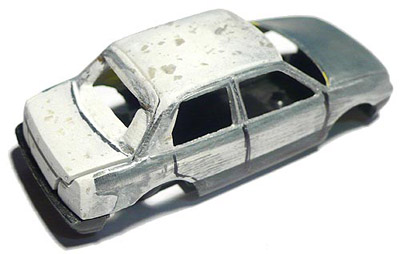 I also had to lengthen the base a bit, to fit the new shape of the body. The gaps have been filled with putty again and shaped & detailed accordingly. 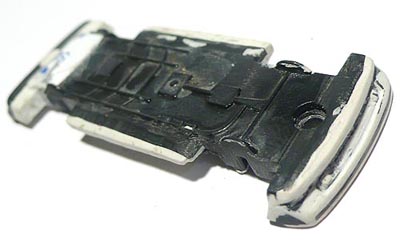 I took an interior from a broken Majorette BMW 3.0 CSL (before you start bashing me, I have to stress, that the model was in an awful condition and the interior was the only part that was still of use), which I then remodelled to fit the body of my custom Daihatsu. Used some more tube metal and putty for it. 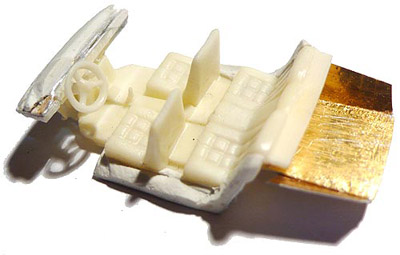 Here you can see the details that I decided to cut into the new custom dashboard. I am working without a magnifying glass so it´s not always easy to set all the cuts perfectly. 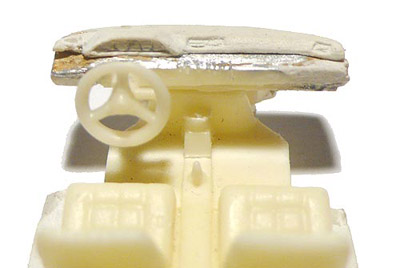 Then I cut out front fascia, filled it with putty and remodeled it by engraving the headlights and the grille. Here you can´t see the grille, which i cut out after the picture was shot. The grille needed two tries, as I screwed up the first one. 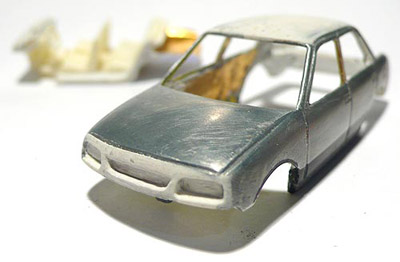 The rear got its lights by engraving the lines into the putty. 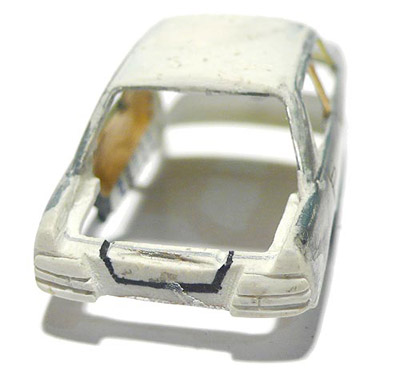 Later I made the bootlid hinges from wires and wrapped a sheet of metal around it to fix it to the roof from inside. Here is the first test, still without glueing. 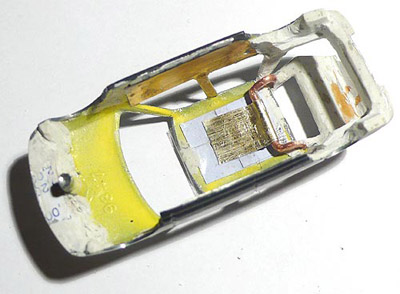 Here I assembled the models main components for the first time, with yet another set of wheels. 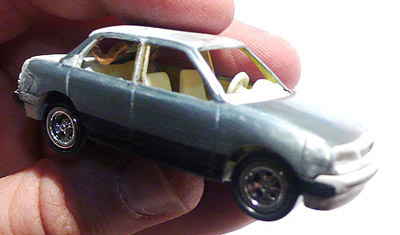 Then the final stage of the project began. First I primered all the parts and then i took the interior which i detailed with a wooden steering wheel (The owner had a wooden wheel instead of the origninal one) and with carpeted trunk. 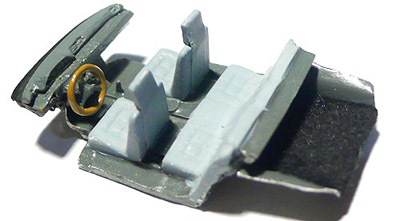 Finally, i spray painted the model in it´s original dark blue metallic color like the real car has, which i got from the automotive parts store. The paint itself is nice enough to fit on multiple vehicles from all ages. 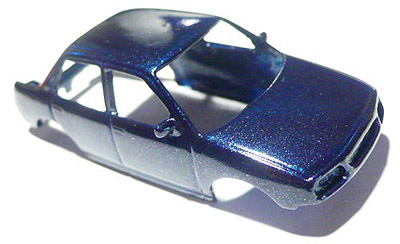 Applied some detail to the body before clearcoating, which will keep the details protected. 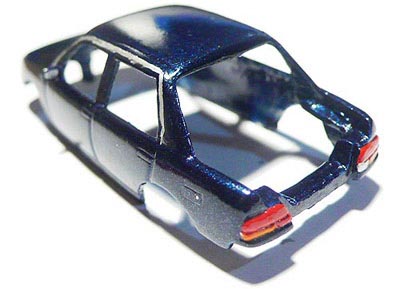 Et Voila! The car is finally here, after a nice final coat of clear and cutting out and applying custom windows used from blisterpack plastic, the model is finished. It took me a little more than a month to finish it.

The car itself turned out cleaner and more precise in terms of accuracy than some earlier customs, maybe a bit too short, but still long enough to be clearly identified as Daihatsu Applause. 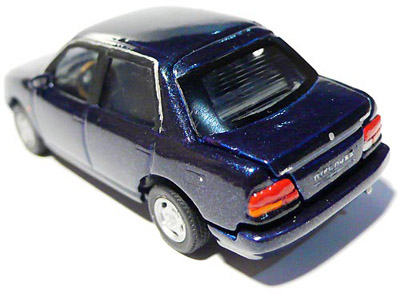 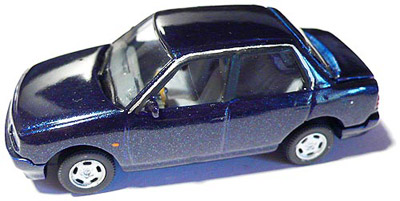 The opening feature of the trunk lid hides another premiere: The trunk floor has been carpeted like we know it from many high end 1:18 scale models. In fact, one such model inspired me to do this and the material is the same. 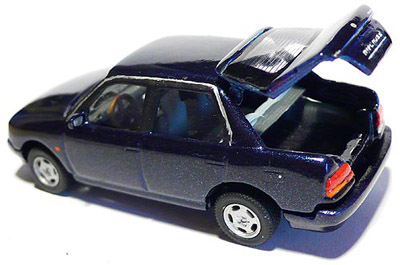 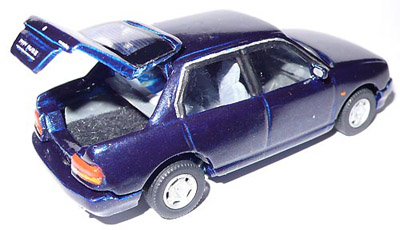 The "APPLAUSE" Letters were cut into the paint down to the white primer, which is a nice effect. Unfortunately, my cutting tools aren´t fine enough to cut even sharper lines. 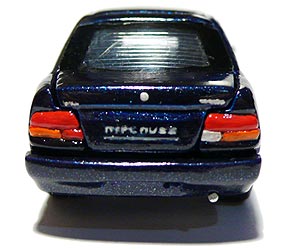 The final choice of wheels fell on a set from Hongwell Mercedes Benz 300 TE, actually a 1:72 scale model, which is in fact rather 1:66 instead of 1:72. These wheels were the only ones to fit the car perfectly. Maybe they could be a little bit bigger, but that´s fine for now. 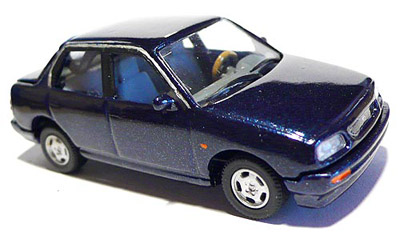 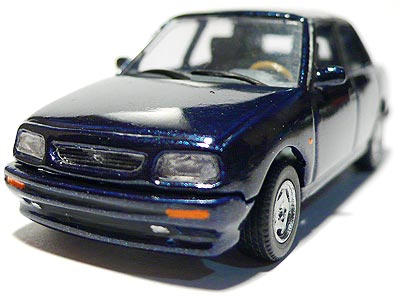 The model also features a working suspension, similar to the Matchbox cars of the 80-s:

Thank you for the long read and I hope you enjoyed this story just as much as I enjoyed making the model.
Pictures © by Sinicars